The Garden of Orchids

It is often claimed that the first magazines devoted to science fiction and the fantastic orginated in the United states and exerted their influence on the emerging fields of ufology, the paranormal and the fortean. The venerable Weird Tales was launched in March 1923 and is often held as the first magazine published devoted to the weird. But Austrian magazine Der Orchideengarten (The Garden of Orchids) preceded the American venture with four years. 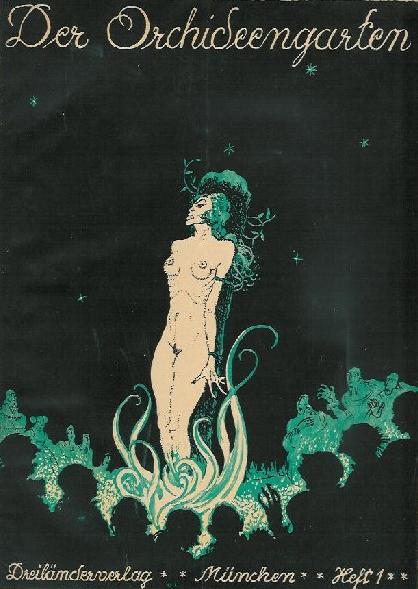 First published in 1919 under the editorship of Karl Hans Strobl (1877 - 1946), an Austrian writer of dark and unusual horror tales who also was the publisher together with Alfons von Czibulka, it ran until 1921. Der Orchideengarten was more than a magazine devoted to the fantastic; appropriately founded in the year that across the ocean, Charles Fort would publish his Book of the Damned, the magazine too, devoted space to anomalous phenomena: "...we no longer dismiss as nonsense all things that are not explicable in terms of the known laws of physics. Mysterious connections between human beings, independent of spatial and temporal separation, spooks, the appearance of ghosts, all are again in the realm of the possible..." as the editorial in the second issue of Der Orchideengarten explained.

Der Orchideengarten featured some truly lurid and haunting covers, and since I originally wrote this post, has achieved recognition as 'the world's first fantasy magazine'. Many of its striking covers can be admired online such as the following ones, beautifully scanned by Will Schofield. 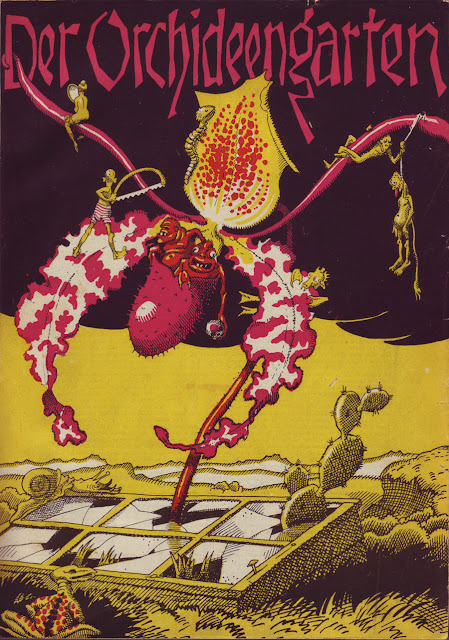 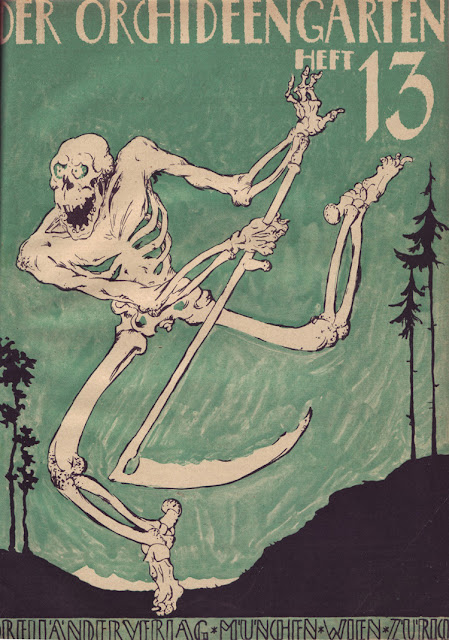 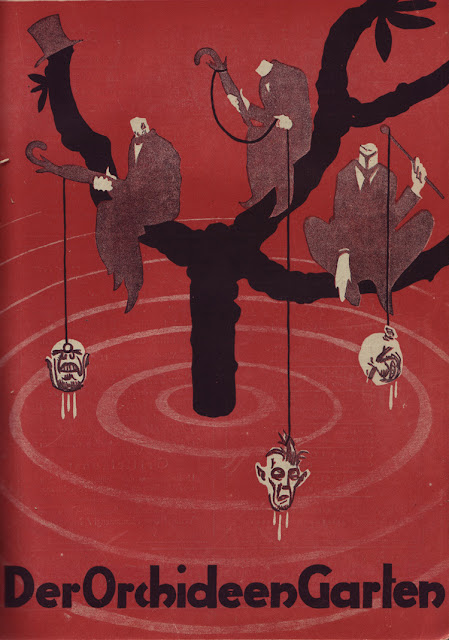 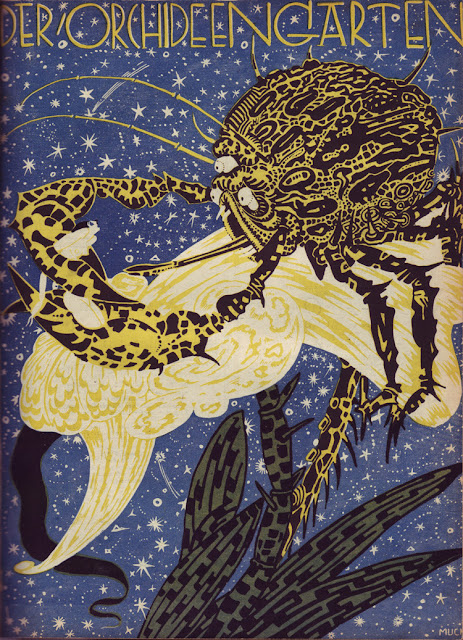 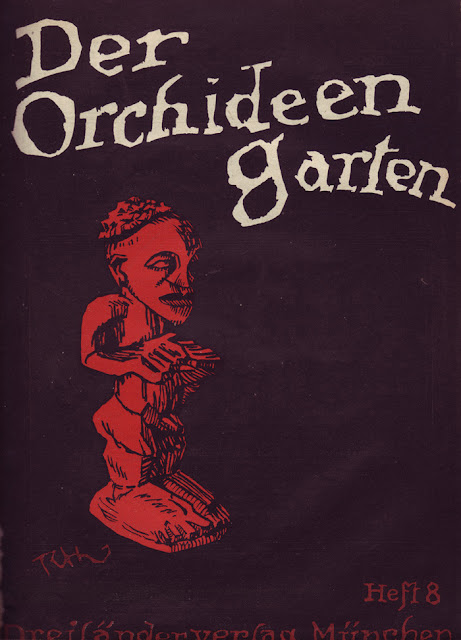 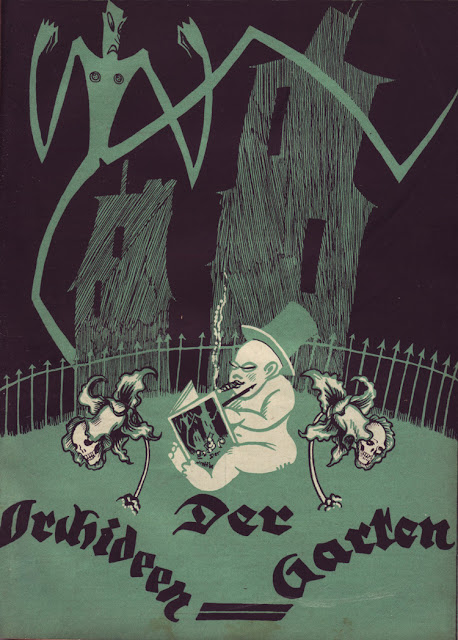 Strobl published his gruesome, unusual and haunting tales in a number of books with titles like Lemuria (1917) and Gespenster im Sumpf (1920) (Spooks on the Moor). Swedish science fiction magazine Hugin (1916 - 1920) preceded Der Orchideengarten with three years and Gernsback's magazines like Wonder Stories, Air Wonder Stories, Science Wonder Stories (first issued 1929) and Amazing Stories (started in 1926) with even a decade. Hugin's cover art though definitely lacked the dark fantastic and visionary strain so apparent in Der Orchideengarten. 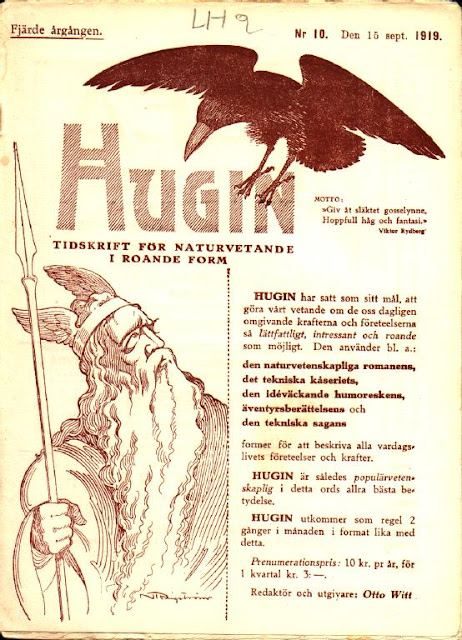 The editor of Hugin, Otto Witt (1875 - 1923) studied at the technical university of the German town of Bingen, at the same time that Hugo Gernsback studied there. Gernsback, born in 1884 as Gernsbacher, at ten years of age was an insatiable reader. At that time he found a translation of Percival Lowell's Mars as the Abode of Life. He devoured the book and went into a delirious phase that lasted two days, during which he rambled almost non-stop about the Martians and their technology, a theme to which he would return in later years. This experience would prove a pivotal point in the life of young Gernsbacher. 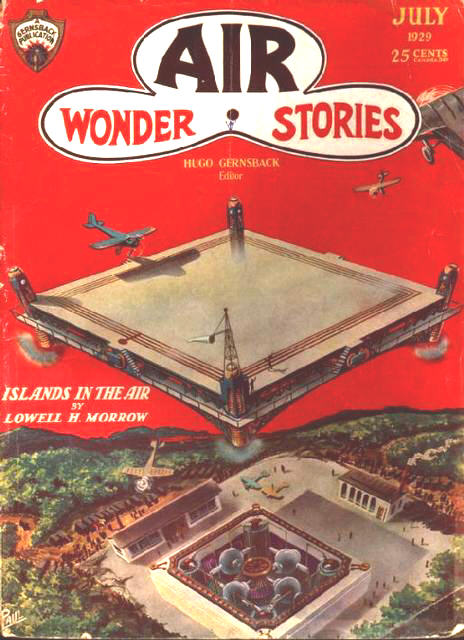 In 1904, then still named Gernsbacher, he went to the United States and changed his name into Gernsback. There he would come to know inventors like Tesla, de Forrest, Fessenden and Grindell-Matthews. Gernsback would also publish an impressive list of science fiction magazines and coin the very phrase 'science fiction'. As such, a case is to be made for Germany as the birthplace of 20th century weird and science fiction magazine publishing.
Posted by theo paijmans at 6:39 AM

Very interesting blog. Keep up the good Work. A comprehensive inventory of these early germanic sci-fi and fantasy themes would be very helpful indeed.

Hi Nicholas, thank you for your kind words. There is much, much more that I hope to post whenever I get the time!

I agree with Nicholas, a great blog you have here! I like it so much I shall add it to my links later tonight.

Hi lesley, thanks for the link! I have visited your blogs and I notice that we share many similar interests! Meanwhile, my research is ongoing and - if I had more time - I will try and update regularly.

Do you have cover scans of any of the other issues? I've only seen two, myself.

Nice that you have seen them! Where was that? I have a complete run of the magazine in my collection. One of these days I might do a gallery of the covers, as they are extremely handsome and very atmospheric!

i'm desperately trying to get my hands on "Der Orchideengarten" even over the libraries here it's quite impossible. Because I'm quite into the classic german phantastic novels, would be great to get in contact with you.
my address is twilightgarden(at)gmx(dot)net
cheers,
Michael

Just to let you know, a cover gallery and perhaps a copy of the table of contents page would be a generous and meaningful contribution to fans of weird fiction. I hope you can find the time somewhere down the line. Thanks.